• Saudi Arabia and OPEC+ partners agreed to extend crude oil supply cuts totaling approximately 7 million barrels per day (bpd), or 7 percent of global demand, through April. Saudi Arabia also announced it would extend its unilateral and voluntary 1 million bpd
supply cut through the end of April, offering further support to the energy market despite a recent rally in oil prices. Russia and Kazakhstan were granted an exemption, which would allow the nations to produce 130,000 and 20,000 additional bpd, respectively,
starting in April.

• Aggregate profits of Saudi banks declined 2 percent YoY to SAR5.2 billion ($1.4 billion), according to data from the Saudi Central Bank. The banking sector’s aggregate earnings were down 23 percent in 2020, totaling SAR38.7 billion ($10.3 billion). The data covers 11
listed Saudi and some foreign banks operating in the Kingdom.

The G20 Tourism Ministers meeting will be held on April[...] 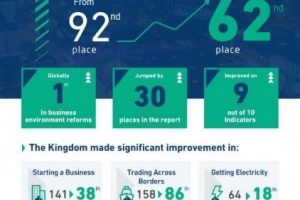 Saudi Arabia is the world’s most improved economy, according to[...]