On August 8, 2017, the U.S.-Saudi Arabian Business Council (USSABC), in collaboration with Regional Economic Models, Inc. (REMI), hosted a webinar on the growing opportunities in the Saudi defense industry and the impact of the Kingdom’s increased spending in the sector. Edward Burton, USSABC President and CEO, gave an overview of developments in the industry, noting that the sector has a 1.8 percent forecasted compound annual growth rate (CAGR) with allocated spending for 2017 estimated at more than $50 billion.

Mr. Burton also discussed the Kingdom’s drive toward localization under Vision 2030 through which Saudi Arabia plans to increase localized manufacturing to 50 percent, up from the current 2 percent. Also under Vision 2030, Saudi Arabian Military Industries (SAMI) was created with the goal to become one of the top 25 defense companies in the next 15 years. Mr. Burton highlighted the major U.S. firms already doing business in the market, including Lockheed Martin, Raytheon, and The Boeing Company. In conjunction with the visit of President Trump to the Kingdom in May 2017, these firms signed major multi-billion dollar deals.

John Bennett, Senior Economist with REMI, discussed the economic model that the company uses to create a comprehensive analysis of the economic and demographic consequences of military spending. By analyzing a set amount of defense spending, REMI’s analysis examined the impact of employment in U.S. states both in absolute and percentage terms. Mr. Bennett noted that in absolute terms, California, Texas, and Virginia will witness the greatest impact in increased defense spending, while Hawaii, Alaska, and Virginia will see the largest impact in percentage terms.

For more information on the webinar, please contact Danielle Wedde at dwedde@us-sabc.org. 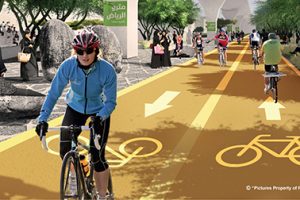 Sector Background The global sports market is expected to grow[...]

USSABC President and CEO Presents on Vision 2030 at NCUSAR Briefing