With the help of the U.S.-Saudi Business Council (USSBC), U.S.-based Mitchell Rubber Arabia has signed a $50 million agreement with the Royal Commission for Jubail and Yanbu (RCJY) to allocate land for the establishment of an elastomer components manufacturing facility in Yanbu.

The USSBC had initially introduced Mitchell Rubber to the RCJY at a roundtable in Ohio in 2019. Prior to the event, the Council’s business development team had identified Mitchell Rubber as a company that would benefit from the opportunities in the Saudi market. The USSBC dedicated more than two years of communication and advisory services to the company to introduce it to market opportunities and potential partners, including through invites to several roundtables that the USSBC organizes periodically to promote U.S.-Saudi trade and investment.

This agreement is the latest of its kind that the USSBC regularly facilitates through its expertise gained from a long history of collaboration between the commercial counterparts in the U.S. and Saudi Arabia. The Ohio roundtable that served as the starting point in Mitchell Rubber’s interest in the Kingdom is one of many events we organize in the U.S. and Saudi Arabia to help connect companies to relevant business prospects and decision-makers. Our events provide a unique opportunity for our attendees to gain information on business opportunities in the rapidly growing and transforming Saudi economy, establish connections with key industry leaders and government decision-makers, and take advantage of the plentiful opportunities to create successful, long-term partnerships.

The agreement is one of 18 contracts signed between U.S. companies and their Saudi partners during President Joseph Biden’s visit to Saudi Arabia and the only investment out of that group that will take place in the city of Yanbu. The facility will manufacture rubber compounds and products such as tires, conveyor belts, hoses, gaskets, and seals for a diverse group of industries. Expected to be operational by Q1 2024, the facility will directly add more than 250 jobs in management, engineering, technical and skilled-production roles for Saudi Nationals to the city of Yanbu.

“Mitchell Rubber thanks the Saudi Arabia Ministry of Investment, the Royal Commission of Jubail and Yanbu, and the U.S.-Saudi Business Council for their support and guidance opening the doors for this cooperative Vision 2030 investment project. Mitchell Rubber Arabia will supply the Kingdom and the region with engineered rubber compounds, provide a broad range of jobs for the Saudi people, and bring state of the art technology towards a bright future in the Kingdom,” said Mitchell Rubber Saudi Arabia’s Chairman & CEO Stephen Lautenschlager.

“The U.S.-Saudi Business Council is pleased to have been able to play a role in the partnership between Mitchell Rubber Arabia and the Royal Commission at Yanbu. We recognized from the moment we first met Mitchell Rubber that they would be a terrific fit for Saudi Arabia.  We are so pleased that Mitchell Rubber and the Royal Commission for Jubail and Yanbu have formed a partnership, which is the ultimate goal of all the work that the Council does to promote opportunities for U.S. companies in the Kingdom,” noted H. Delano Roosevelt, U.S.-Saudi Business Council (USSBC) President and CEO.

Mitchell Rubber Saudi Arabia was formed in 2020 to invest in and transfer technology to Saudi Arabia under Vision 2030 and the corresponding SME rubber cluster. The company is an offshoot of U.S.-based Mitchell Rubber Products, Inc., which has over 85 years of experience engineering, formulating, and manufacturing custom rubber compounds and products.

The RCJY, established in 1975, is an autonomous organization of the Saudi government tasked with overseeing the industrial development of Jubail and Yanbu. Jubail is home to the world’s largest industrial city, the world’s largest Independent Water and Power Project (IWPP), and serves as the headquarters of Saudi Basic Industries Corporation (SABIC). Yanbu is home to the country’s second largest port (serving the city of Medinah) and several major petrochemical facilities. The USSBC has worked closely with the RCJY for many years to introduce them to U.S. businesses looking for overseas partners. 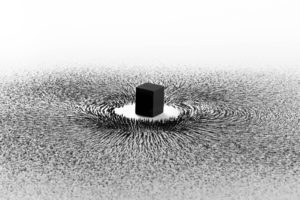 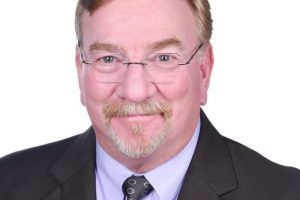 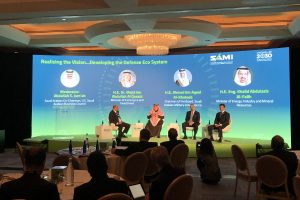 USSABC Co-Chairman moderates panel with Ministers to discuss future opportunities in the industry.

Organized by Saudi Arabian Military Industries (SAMI) in collaboration with the U.S.-Saudi Arabian Business Council, the Defense Technology and Security Conference concluded its sessions with the participation of more than a dozen high-profile speakers and over 100 industry leaders, advisors, regulators, and influencers who came to discuss and learn more about Saudi Arabia’s vision and strategic outlook in developing its defense industry with a special focus on technology and security as the two main components of the program.