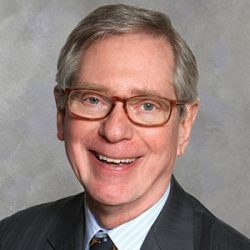 Thomas A. Stewart is the Executive Director of the National Center for the Middle Market, the leading source for knowledge, leadership and research on mid-sized companies, based at the Fisher College of Business at The Ohio State University. Stewart is an influential thought leader on global management issues and ideas: an internationally recognized editor and publisher, authority on intellectual capital and knowledge management, and a best-selling author.

Before joining the National Center for the Middle Market, Stewart served as Chief Marketing and Knowledge Officer for international consulting firm Booz & Company (now called Strategy&), overseeing the firm’s intellectual agenda, major research projects, and strategy + business magazine. Prior to that, he was for six years the Editor and Managing Director of Harvard Business Review, leading it to multiple finalist nominations for a National Magazine Award. He earlier served as the editorial director of Business 2.0 magazine and as a member of the Board of Editors of Fortune magazine.

His new book, Woo, Wow, and Win: Service Design, Strategy, and the Art of Customer Delight (co-authored with Patricia O’Connell), was published by Harper Business in November 2016. He is also the author of Intellectual Capital: The New Wealth of Organizations and The Wealth of Knowledge: Intellectual Capital and the Twenty-first Century Organization, published by Doubleday Currency in 1998 and 2003, respectively. He has contributed chapters to four other books and published articles in Harvard Business Review, strategy + business, Fortune, Business 2.0., Inc., Financial Times, The Hill, Industry Week, Ad Age, and elsewhere. A twelve-time participant in the World Economic Forum, he has delivered lectures and seminars across the U.S. and in more than two dozen countries worldwide.