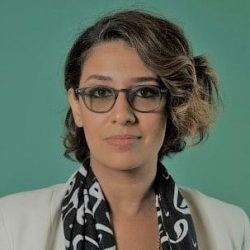 Hanaa Saleh Alfassi is a film producer and director, with an Master’s  in Film and Media Production from New York Film Academy and more than 13 years of experience. Her short films were official selections at numerous festivals, including her dark comedy, “The Last Sohour,” which won two awards and was officially selected in over 30 festivals. Hanaa’s an Alumna of Rawi Screenwriters Lab that ran in collaboration with Sundance Institute.

Her recent film, “Lollipop,” was an official selection at the Dubai International Film festival 2017. Over the years, Hanaa has had the pleasure of working with reputable companies and channels including Proctor&Gamble, Uber Global, Aljazeera Documentary, MBC, Vizyon, KAUST, and a multitude of others. Furthermore, two of her early short films were aired on the renowned MBC TV&were watched by millions of viewers.