The following is a summary of all announcements from the past month regarding investment deals, partnerships, and other commercial news between U.S. and Saudi companies.

Aramco, IBM Set to Establish a Center for Digital Innovation in Kingdom

Saudi Aramco and IBM, enlisted in the New York bourse, announced plans that they are determined to give priority to establishing a global center for digital innovation in the Kingdom. Saudi Aramco is a member of the Business Council.

The new integrated logistics zone at Riyadh’s King Khalid International Airport which will serve Asia, Africa, and Europe, has welcomed Apple as its first major investor.

Saudi-based Tanmiah Food Company has announced the successful completion of its strategic partnership transaction with U.S.-based Tyson Foods, Inc., strengthening Tanmiah’s position regionally and extending its global reach, as a major poultry producer. The deal was signed on July 5th of this year.

International Maritime Industries (IMI), the largest integrated, full-service shipyard in the MENA region, has awarded a detailed design engineering contract for the construction of jack-up rigs to Zentech, a Houston-based marine engineering firm.

Neom, the developer of a $500-billion new futuristic city in Saudi Arabia, has announced that its key utility subsidiary Enowa has signed a framework bridging agreement with Worley, a leading global provider of professional project services in energy, chemicals, and resources sectors. NEOM and Worley are members of the Business Council. 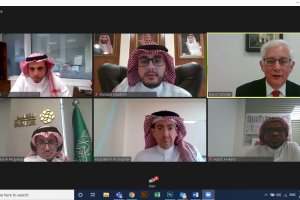 Downturn in the number of projects for the remainder of[...]