With global measures to mitigate pollution and climate change, rising fuel costs, and changes in consumer preferences, electric vehicles could potentially disrupt demand in the refined products market. Internationally, automakers have already begun shifting some focus towards production of hybrid and electric vehicles as emissions regulations have tightened.  However, as some argue, benefits to consumers and the planet may be more effectively achieved in the short term through advances in fuel efficiency.  In Saudi Arabia, evolution in the auto industry exists in the broader backdrop of Saudi Arabia’s aim to end ‘dependence on oil’ as part of Vision 2030.

Major events have prompted international attention to the auto industry in Saudi Arabia, namely the Kingdom’s shift on policy surrounding women driving and increases in fuel prices beginning in January 2018. Approval of female drivers in Kingdom is not only a major policy shift, but it also could have farther reaching economic impacts. According to 2017 data from the General Authority for Statistics, there are approximately 9.1 million women in Saudi Arabia between the ages of 15-59.  Women will gain eligibility to drive at age 18. Given these figures, there will be a sizeable new market influencing both automakers and companies in the supply chain. This larger market could potentially support the Kingdom’s goal of localized production through establishment of facilities to manufacture and assemble autos in Kingdom. Reportedly, Ford dealers in Saudi Arabia already plan to shift their offerings compact cars that have higher popularity among women.

Additionally, Saudi Arabia’s released timeline of reforms to energy prices could have an effect on consumer preferences, increasing sales of hybrids or electric vehicles on the market. As part of Saudi Arabia’s Fiscal Balance Program 2023 (FBP), the Saudi Cabinet has noted incremental price increases for gasoline and diesel. Inclusive of the VAT, standard gasoline prices increased by 83 percent in the new year while premium gasoline prices increased by 127 percent. 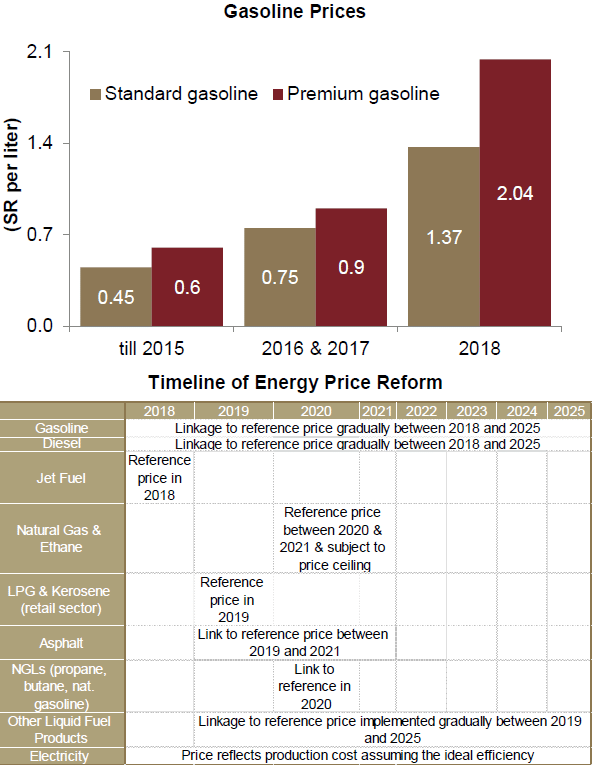 As the market stands with fuel price increases, overall passenger car sales are still expected to grow at 6 percent in 2018, raised from a forecast of 4 percent.[1] With the expected government investment in infrastructure, commercial vehicles sales in Saudi Arabia are forecasted to see the steepest increase from 2018-2022, as shown below. In the near-term, increases in passenger vehicle sales are expected to be driven by higher levels of consumer spending as a result of the Saudi Government’s cash transfer program to Saudi citizens as well as registrations of new female drivers.

As hype surrounding electric vehicle technologies increases and as governments offer greater incentives to purchase, there has been a noticeable uptick in electric vehicles in certain countries. For instance, the electric vehicle market in the United States grew by nearly 40 percent year-on-year in H1 2017. To promote the technology in the Gulf region, electric car models including Tesla participated in the Electric Vehicle Road Trip (EVRT) at the end of January 2018. The nine-day road trip of all-electric powered vehicles drove from Abu Dhabi, to the mountains of Oman, and across the Northern Emirates. During this excursion, 18 new charging points were opened.

The U.A.E. has announced the goal of 42,000 electric vehicles by 2030, offering incentives such as free public parking and charging along with discounted registrations. Tesla already has an established presence in the Gulf, officially launching in the U.A.E. in 2017 and delivering Model S and Model X vehicles. Prior to this, hundred of customers had already imported Tesla models, though the official launch also deployed a Supercharger network and boosted local service capabilities.

Sources familiar with the Saudi auto industry have reported that Tesla is currently working closely with major auto players to enter the Saudi Arabian market. 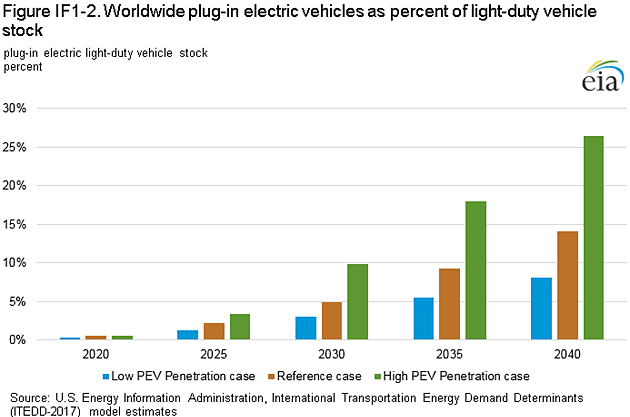 The question remains if the presence of electric vehicles will expand throughout Saudi Arabia over the next decade and beyond. In an interview with CNBC, Saudi Aramco’s CEO Amin Nasser said “Electric vehicles will continue to grow. They will take good market share, but it will be decades before they shoulder a significant percentage of the energy mix.”

At the beginning of the year, the Saudi Electricity Company (SEC) launched the Kingdom’s first electric vehicles pilot project, signing agreements with three Japanese automakers – Japanese Tokyo Electric Power Co (TEPCO), Takaoka Toko, and Nissan Motor Company.  This agreement also comes with steps towards developing the necessary support infrastructure, including fast-charger stations capable of charging electric vehicles within 30 minutes. SEC noted that “such a move is part of the company’s strategy to reduce reliance on oil and to cut emissions.”

To evaluate the potential impact of electric vehicles in Saudi Arabia, Deloitte conducted a comparison study on the cost-effectiveness of all electric vehicles in Saudi Arabia, evaluting an electric Ford Focus and its gasoline counterpart. By these estimations, in considering fuel and operating costs, each electric vehicle would cost $817 (SR3,064) less per year. These figures estimate that under the condition that if just five percent of all vehicles sold in the Kingdom between 2015 and 2022 were electric, this would result in a total savings of $47 million (SR176 million). In addition, these vehicles would save a total of 2 billion pounds of carbon emissions.

Fiscal incentives including government subsidies may help to encourage electric vehicle purchases in Saudi Arabia; however, Saudi Arabian infrastructure requirements allowing for the use of electric vehicles is a key obstacle to growth in popularity. There are limited possibilities for factures of public charging stations and residential equipment.  Other topics to be considered include electricity usage, emission standards, and parking options.

Some industry experts indicate that hybrid vehicles could be the next wave in Saudi Arabia. First, hybrid vehicles have already become popular in the U.A.E., perhaps indicating a movement for Saudi Arabia to  follow suit. The largest supplier of Hybrid Electric Vehicles (HEV) in the U.A.E., Al-Futtaim Motors, noted a 251 percent y-o-y rise in overall sales in 2017. Taxi operators in Abu Dhabi and Dubai have begun using hybrid vehicles made by Toyota Camry, and the Dubai car-sharing services Ekar and Udrive noted additions of hybrid cars to their fleets in cooperation with the Dubai Roads & Transport Authority (RTA), indicating another tangible avenue of market expansion within the Emirates.

Hybrid vehicles offer a practical advantage among environmentally-friendly solutions in that they do not impose infrastructure changes or necessitate changes in driver behavior. Given increases in fuel prices, hybrid vehicles have the potential to gain popularity in parts of the Kingdom. Even as OPEC’s Long-Term Strategy report recognizes: “Electric hybridization is becoming attractive for cars mainly used in urban environments with high fuel prices.”

In comments recently made by Saudi Aramco’s Chief Technology Officer Ahmad Al Khowaiter, he underscored that in the short term, efficiency of traditional cars powered by the internal combustion engine is the best strategy for driving down emissions. New technologies including gasoline compression within a cylinder rather than spark plug ignition will support the viability of the internal combustion engine.

We continue to advance our efforts to develop new fuel and engine combinations.  We plan to create automotive technologies that, in combination with innovative new fuels, can make a substantial impact on reducing emissions and improving efficiency, all while maintaining vehicle performance.

As part of its initiative, Saudi Aramco now operates its Detroit Research Center in the United States such that researchers collaborate with major automakers, research and development organizations, and engine designers to develop new fuels technologies. For instance, through the chemical kinetic mechanism, AramcoMech, researchers explore clean combustion of different fuels at the molecular level under various different conditions. In addition, the Center works with automakers in the U.S. and Europe to make improvements regarding pollutant emissions and fuel efficiency through Gasoline Compression Ignition (GCI) technology. Compression technology would redesign gasoline engines to function like diesel engines – a redesign estimated to improve efficiency by as much as approximately 40 percent.  Aramco notes that “This was done on several light-duty and heavy-duty platforms using market and blend stock gasoline fuels (like naphtha) instead of diesel.” 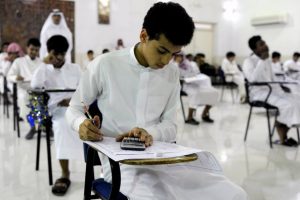 #LISTEN Albara’a Alwazir, economist and author of the @US_SaudiBiz report says the construction industry in #SaudiArabia will rebound