Moderated by USSBC President and CEO H. Delano Roosevelt, the webinar provided over 140 participating representatives from U.S. and Saudi companies with an understanding of the Kingdom’s blossoming defense and security sector.

GAMI was established in August 2017 to grow the Kingdom’s military industries sector in line with the Vision 2030 target of localizing more than 50 percent of defense expenditures by 2030. GAMI is the regulator, enabler, and licensor of the sector and is responsible for its development and empowerment.

Since the launch of Vision 2030 just five years ago, Saudi Arabia has achieved significant socio-economic milestones while showing tremendous progress in transforming many key sectors of the Kingdom’s economy.

As a result of GAMI’s commitment to its mandate, the military industries sector has rapidly transformed and is now on a steady path to become a major contributor to Saudi Arabia’s non-oil GDP. In just a few years, the sector’s localization rates have more than doubled to 8 percent of total expenditure, according to Governor Al Ohali.

Governor Al Ohali emphasized the breadth of opportunities Saudi Arabia’s defense localization presents to global investors and U.S. defense partners. Development of the military industries sector requires a whole ecosystem of research and technology institutions, a skilled workforce, and other support functions in addition to local production capabilities, he noted.

In the wake of the COVID-19 pandemic and all the disruptions associated with it, Governor Al Ohali stressed that GAMI fully understands the importance of strong, resilient supply chain networks in the post-pandemic era. Governor Al Ohali noted GAMI’s role in strengthening supply chains by facilitating collaboration and strategic partnerships between local suppliers and global OEMs.

Mr. Roosevelt recalled the long history of cooperation between the U.S. and Saudi Arabia and predicted the U.S. will continue to play a dominant role in supporting the Kingdom through future strategic relationships. He added that the U.S.-Saudi Business Council will also continue its roles of facilitating connections between U.S. and Saudi companies and educating U.S. businesses about the benefits of engaging in the Saudi market.

The total value of awarded construction contracts across Saudi Arabia[...] 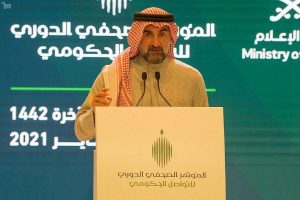