Facebook and its platforms – Instagram, WhatsApp, and Messenger – have skyrocketed in popularity with Saudi Arabia’s tech-savvy younger generation. Social media growth in Saudi Arabia has averaged 8.7 percent annually, quickly becoming a part of life for the younger Saudi generation driving social and economic change in the Kingdom. In just the last decade, the Saudi population of nearly 35 million – 66 percent of whom are under the age of 35 – have become highly interconnected as the Kingdom’s business and government sectors embrace digitalization.

Over 93 percent of the Saudi population classify as “active internet users” and 72 percent as “active social media users,” according to Dubai-based digital marketing agency Global Media Insight. The average Saudi spends nearly 8 hours per day on the internet, 3 hours of which is spent on social media. YouTube, Instagram, Facebook, and Twitter are the most popular social platforms in the country (respectively), each with over 20 million users. WhatsApp, with 26.25 million users, is the country’s most popular messaging app, followed by Snapchat, Facebook Messenger, and Tik Tok, each with more than 10 million active users.

These figures would not have been possible if not for the rapid technological and economic change in the Kingdom. Major investments in internet infrastructure have improved the connectivity of the 84 percent of Saudis living in an urban environment, with high rates of smartphone ownership (including 40 million mobile subscribers, or 116 percent of the population) contributing to the technological savviness of the young population. With the Saudi government also prioritizing development of its e-commerce and digital entertainment sectors, the opportunities for tech companies in the country are only just starting to realize their full potential.

The familiarity with social media of Saudi Arabia’s younger generations reflects a fundamental shift in the country’s society and business landscape towards digitalization and technological innovation. The Saudi government, recognizing the role of technological innovation as a key driver of their Vision 2030 framework for diversification and growth, launched the ‘ICT Strategy 2019-2023’ initiative to drive investment in the Kingdom’s digital infrastructure. More specifically, the government is targeting e-commerce, digital education, digital health, smart city tech, national data, e-government, and Industry 4.0 with its ICT strategy. The strategy seeks to attract international tech companies, promote research and development startups, increase private-public sector ICT coordination, and increase localization in the IT sector by supporting local technical skills training.

The swift adoption of social media and digital skills in the country was made possible in part by the Saudi Telecom Company (STC)’s investments in IT infrastructure. The STC deployed more than 2,300 5G towers across the country in 2019, bringing the country to a total of 5,797 towers spanning 217,000 km across 30 cities as of May 2020; this follows a 23 percent increase in home fiber optic connectivity from the previous year. Consequently, the Kingdom’s 5G network coverage ranks first in the Middle East/North Africa region and third globally, according to the Ministry of Communications and Information Technology. GlobalData further estimates that ICT spending in the Kingdom is projected to continue growing 9 percent (compound annual growth rate) from 2019 to 2024 to reach a total of $46.6 billion. The Kingdom’s investments in internet speed have further propelled the country’s digitalization and connectivity, with average mobile internet download speeds in the STC’s network topping out at 106.19 Mbps, according to a 2020 report by the Communications and Information Technology Commission.

The Kingdom highlighted its progress in its annual Future Investment Initiative (held on January 27-28, 2021), where it gained international recognition of its efforts by placing first among the G20 in terms of digital competitiveness, according to the European Center for Digital Competitiveness’s Digital Riser Report 2020. 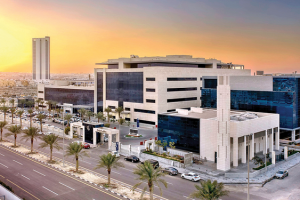