As travel and social distancing restrictions from the pandemic are slowly lifted, Saudi Arabia will emerge as a host to many local tourist attractions and sightseeing destinations. The country offers everything from ancient cities in the deserts and mountains to relaxing luxurious getaways. The natural beauty of the landscape ranges from misty, forested peaks in the southern Asir mountains, to coral reefs next to pristine beaches along the Red Sea, to the ancient desert city of Al-Ula, and everything in between. Regardless of your interests, Saudi Arabia offers a variety of options for your next vacation.

Asir Province and The Asir Mountains

For those seeking a brief respite from the summer heat of the Saudi desert, the Asir Mountains in the eponymous Asir Province in Saudi Arabia’s south offer a daily average summer temperature of around 65 degrees Fahrenheit (18 Celsius) and a brief, cool wet season from February to April. Visitors can enjoy both the refreshing climate, the beautiful sights, and historic towns, and in the near future, even more luxury resorts and fantastic getaways thanks to some of the Saudi government’s newly announced investment plans for the tourism sector.

Thanks to a planned $3 billion investment by the newly launched Soudah Development Company (SDC), the Asir region will soon be home to luxury mountain destinations in Soudah and Rijal Almaa. This renewed focus on the region’s tourism infrastructure and destinations will include 2,700 new hotel rooms, 1,300 residential units, and 30 unique entertainment attractions, which will all contribute an estimated $8 billion to Saudi Arabia’s GDP by 2030 by welcoming more than 2 million visitors a year and creating 8,000 jobs by 2030.

As the capital of the Asir Province, with a population of over 1 million, Abha may be your starting point before branching out into other trips in the region and is also a popular tourist destination of its own accord. Sitting almost 7,500 feet above sea level, Abha is well known for its mild climate. The Shadda Palace, built in 1927, is now home to a museum and is one of many old hilltop fortresses that are characteristic of the city. During the summer, the Abha Festival hosts sporting events, shows, exhibitions, and live musical performances.

Must Visit: The center of Abha holds the historical village of Al-Muftaha, a 260-year-old cluster of traditional Aseri buildings characterized by colorful, thick mud walls that naturally cool the buildings and protect against rain. The village’s historic architecture, theater, and tourism services were recently rehabilitated to promote tourism to the site. 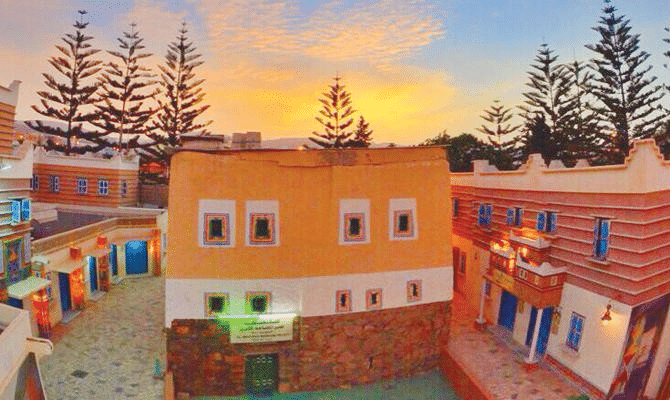 Where to eat: Sip your Shai (Arabic tea) while watching the sun set over the horizon at the Green Mountain Restaurant – this restaurant is sits on top of a hill and is illuminated at night with dazzling green lights, making it visible from all around the city. Green Mountain is five minutes from the city center is linked to the Abha Palace grounds via cable car. The large city is home to many other restaurants serving regional dishes as well. Make sure to try Abha’s famous Asir honey. 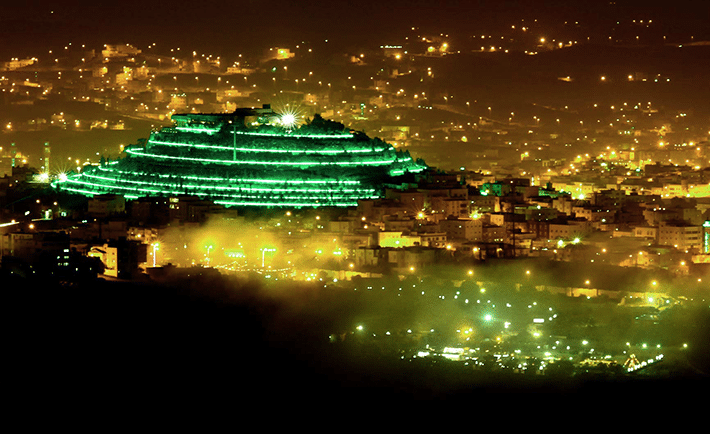 Where to shop: Abha’s museums sell local handicrafts and other trinkets, while the city’s Aseri souqs, including the Tuesday market Souq Al Thulatha, are popular with residents and visitors alike. 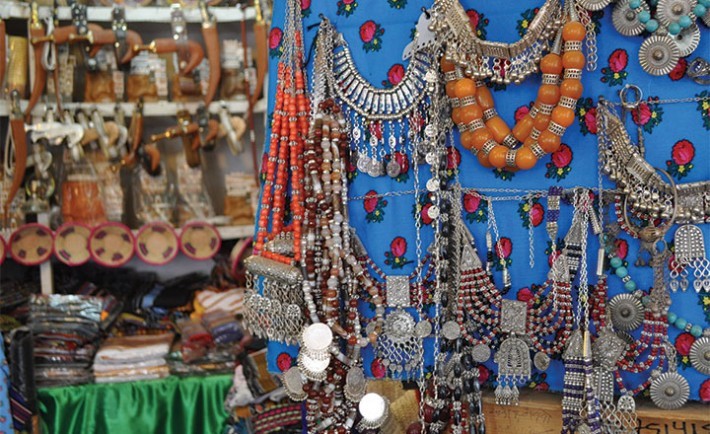 How to get there: Abha hosts a regional airport and is connected by road to Jeddah and other major Saudi cities. The city hosts the Abha Palace Hotel, a new five-star hotel with a view of the city’s lake and surrounding mountains, but there are plenty of other modern hotels in the city as well.

The historic town of Soudah sits at nearly 10,000 feet above sea level near the peak of the juniper covered Jabal Soudah (or Jabal Sawdah), Saudi Arabia’s highest mountain – this tourist attraction is linked to the mountain’s peak by cable car and is located near other historic villages, such as Rijal Almaa, known for the traditional red brick architecture style of its buildings, and Al Habala, also known as the “hanging village” for its cliffside placement.

Must Visit: The cable car leading to the top of the 10,279-foot mountain stretches another 10,000 feet to connect with the town of Rijal Almaa. As-Sahab Park lies near the top of the mountain, offering many unmarked trails that visitors can trek. 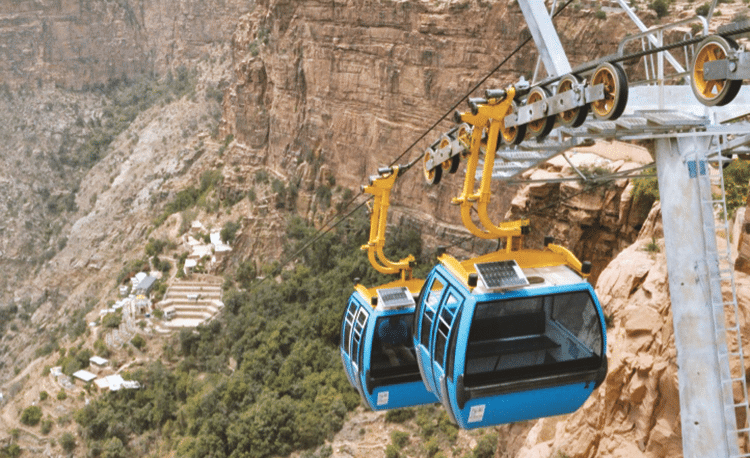 Cable car running up to the “hanging village” of Al Habala in the Asir Mountains. Source: Destination KSA.

Where to eat and shop: alongside the road into Soudah you will find many roadside stalls selling homemade dishes and handicrafts. Traditional local restaurants can be found throughout the town, or you can picnic in the hills with the panoramic views as a backdrop. 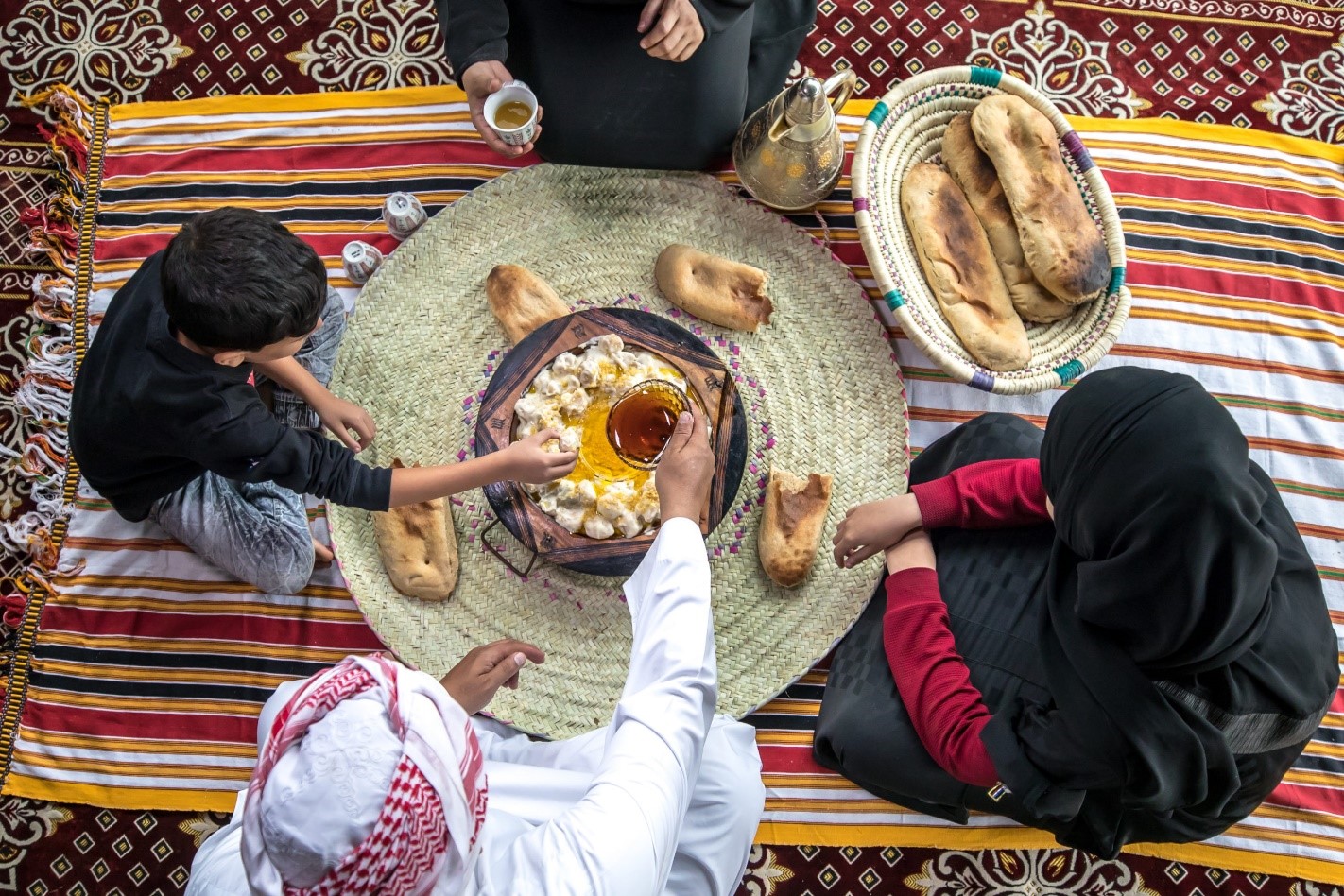 Picnicking near Soudah with a typical Aseri meal. Source: soudah.sa

How to get there: Road signs leading to the town will spell it differently in English: Al Saudah, As Soudah, Sawdah, or Al Soodah all refer to the same place. The town is about 20 miles from Abha.

When you are not hiking or exploring the surrounding area, you can sightsee and wander through the streets of Rijal Almaa while stopping by roadside stalls of artisans selling their goods, or visit the town’s museum, which is home to more than 2,800 ancient tools, weapons, and artifacts and a wealth of antique jewelry. The town is known for its old multi-story buildings, some with as many as eight floors and with red facades built from stone, clay, mud, and wood, that tower over the mountain town’s winding streets.

Must Visit: The town has several palaces to explore, such as the Palace of Riyadh, built in 1902, and the Palace Mousmar, built in 1537. 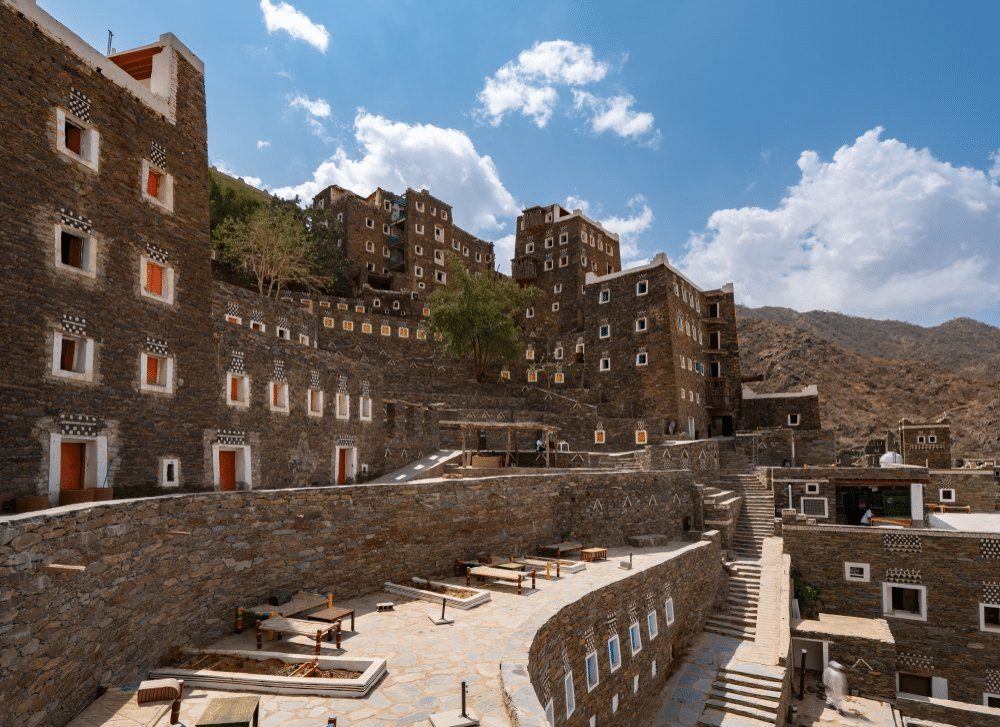 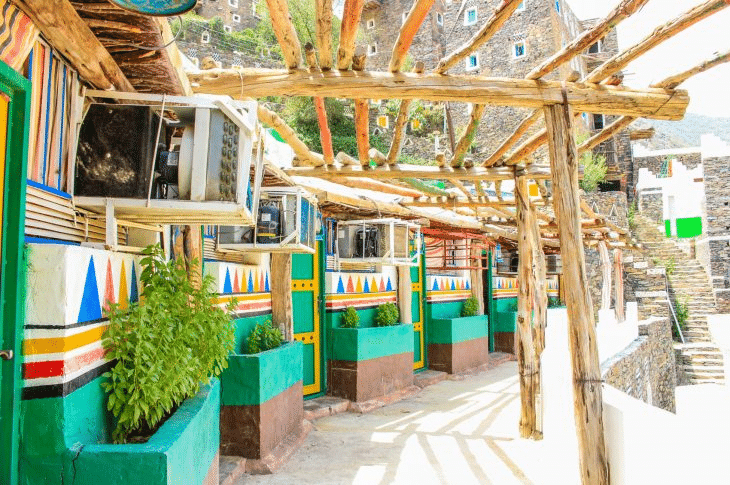 Where to eat and shop: Roadside stalls offer local dishes in addition to handmade arts and crafts. A delicious, traditional meal can be had at any of the town’s small local restaurants as well. Other pop-up stalls can be found in the town’s center and around the town’s winding streets.

How to get there: Rijal Almaa is connected to the rest of the country by two roads: one leads about 30 miles away to Abha, while the other winds away through mountains and tunnels.

Tucked away in the mountains about halfway between Abha and Jazan is the valley of Wadi Lajab, home to a network of rugged trails popular with hiking enthusiasts in Saudi Arabia. You may need an SUV to access the trails, but once there, you will find winding mountain streams that you can swim in, beautiful hiking paths winding through the canyons, and a green oasis filled with wildlife, including monkeys. The colorful sandy rock formations, waterfalls, and caves add to the excitement of your hiking trip here. The trails are about a 3-hour drive from Abha, or a two-hour drive from Jazan.

What to do: guided or unguided hiking, picnicking (make sure to pack up your trash as there are no trash cans or other facilities), swimming, stargazing. 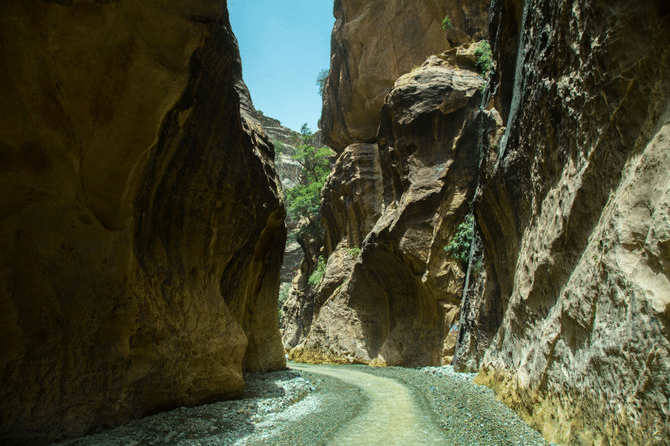 Although not in the Asir region, the Farasan Islands, off the coast of Jazan in the far southwest of Saudi Arabia, are another secluded getaway and popular destination for tourists. Fishing on rented boats or on chartered trips is very popular with tourists, as is the opportunity to prepare your own catch for meals. Scuba diving conditions around the islands’ pristine coral reefs are ideal, although the islands do not have any dive centers so divers must bring their own equipment. The islands are home to diverse wildlife on land and in the sea, including at the Farasan Island Marine Sanctuary, a protected area.

Must Visit: The reconstructed sandstone village of Al Qassar, dating back 2,000 years, is one of the main historical sights on the islands and has been rehabilitated to welcome tourists. 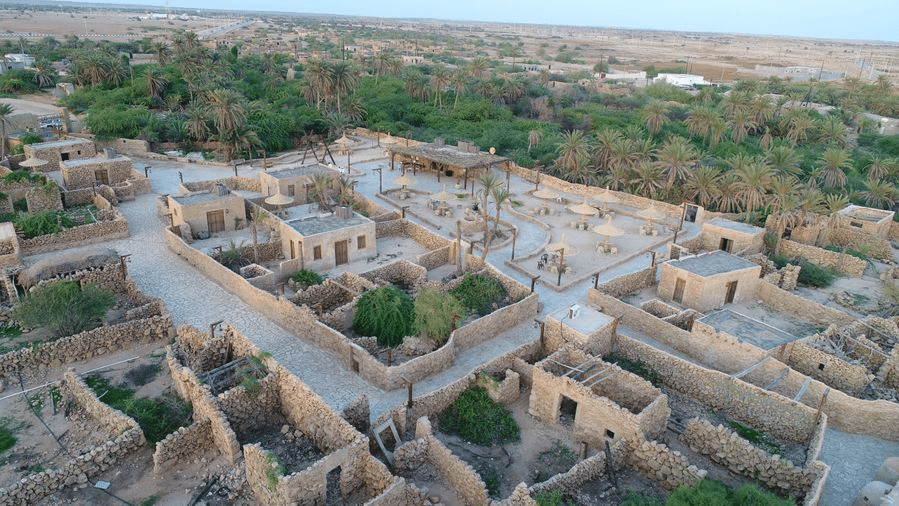 How to get there: Free ferry rides to Farasan Island are available twice a day from Jazan’s port. Farasan Coral Resort and the Farasan Hotel are the main hotels on the islands, but some people choose to camp on the beach as well.

For additional information by the U.S.-Saudi Business Council on other attractions in Saudi Arabia, including an overview of recent government investments in tourism throughout the country, click here. 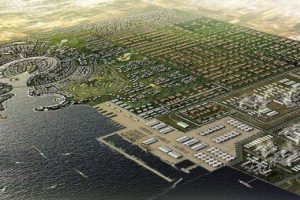 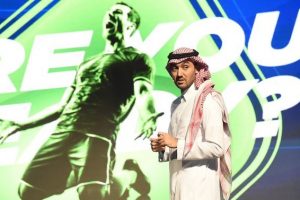