Over its 25-year history, the Council has evolved from an organization focused on disseminating information on trade and investment opportunities to an entity recognized today as the premiere U.S.-based bilateral business promotion organization working with Saudi and American companies.

The U.S.-Saudi Business Council, “the Council,” was established as a non-profit organization in 1993 as a spin-off of the U.S.-Saudi Arabian Joint Economic Commission, a technical assistance initiative between the Saudi Ministry of Finance and National Economy and the U.S. Department of the Treasury, which was co-chaired by former Saudi Minister of Finance and National Economy H.E. Mohammed Abalkhail and U.S. Secretary of the Treasury Lloyd Bentsen.

For 25 years of continuous operation, the Council has contributed to hundreds of millions of dollars in cross-border trade and investment in the forms of contracts, memoranda of understanding, and letters of intent. The bottom line deliverable of the Council in Saudi Arabia is access – access to information and to senior decision makers in both the government and private sector.

The Council also plays an advocacy role by working with the American and Saudi public and private sectors on issues affecting trade and investment. In this regard, over the years the Council has organized and convened formal discussions between senior executives of Saudi and American companies and government officials from the Saudi Ministries Foreign Affairs, Commerce, and Health and the U.S. Departments of State and Commerce. The opinions and commentary from these gatherings have informed both governments through policy papers and recommendations from business.

With offices in Riyadh, Saudi Arabia and the U.S., and a membership base of approximately 250 leading American and Saudi companies, the Council effectively utilizes its strong U.S. and Saudi government support, deep-seated market knowledge and contacts within Saudi Arabia, to accelerate the speed and ease of doing business in the Kingdom.

In September 2015, Custodian of the two Holy Mosques H.M. King Salman bin Abdulaziz visited Washington, D.C., and the Business Council was honored to host a private dinner bringing to together top U.S. and Saudi executives, government officials, and industry leaders. The event forged new business partnerships and showcased the enduring relationship between the U.S. and Saudi Arabia. 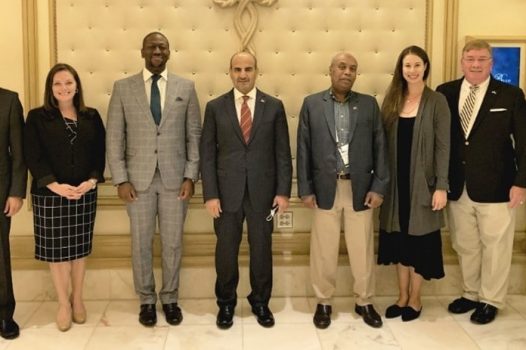 The Council continued to build strong partnerships with Saudi Government entities, key private sector clients, and crucial stakeholders. Over the course of 2021, the Business Council organized and executed a series of programs which included numerous virtual meetings as well as two Saudi delegations to the U.S.READ MORE